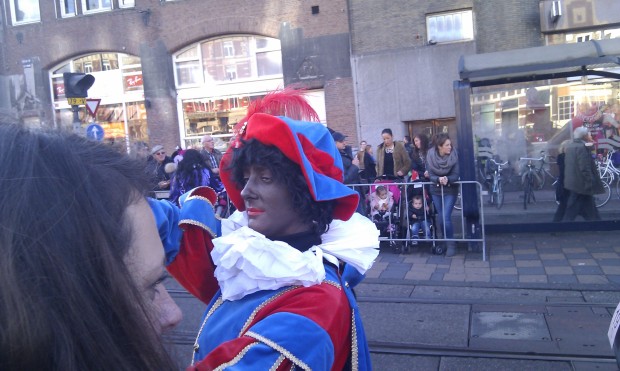 The Dutch have many strange traditions. Perhaps one of the strangest is that of Zwarte Piet. Where Santa Claus in many countries has elves, in the Netherlands Sinterklaas[1] has Zwarte Pieten, which is to say Black Peters. Men(and women) put on black face, paint their lips red and thick, and put on garish costumes reminiscent of those black slaves used to wear. The Black Peters are Santa’s helpers. They hand out “pepernoten”, ginger biscuits that the Dutch love, and they perform comedy and acrobatic acts. The Zwarte Piet tradition is one that would have you denounced as racist in South Africa (you may well end up in trouble with the law), but in the Netherlands Zwarte Piet is entrenched and accusations of racism have not (yet) killed this tradition.

Children love Zwarte Piet. They are oblivious of his origin in slavery and they are often told his face is black because of the soot he encounters when climbing through chimneys. Zwarte Piet has been innocent, good fun for a long time. But not to everyone. To some Zwarte Piet is a symbol of racism that must be eradicated. Until recently the group of people that thought this has seemed small, ignorable. But this year there were several protests connected with Zwarte Piet and even the media outside The Netherlands have commented on this controversial tradition. You can read about it here and here.

Many Dutchies only become aware of the controversy surrounding Zwarte Piet when they are older. By then, it would have become a precious, and to them, completely innocent, part of their childhood. It is perhaps natural that calls to do away with the tradition have been met with outcry and petitions to keep Zwarte Piet. Many (mostly white) Dutch people simply cannot, or will not, countenance any accusation of racism. It seems clear that the normally very tolerant Dutch are unwilling to place themselves in the positions of their accusers.

The Dutch reaction has, in some cases, gone further than mere polite shock at the thought that Zwarte Piet could be called racist. There have been death threats, racial slurs aimed at a Dutch singer opposed to the custom, and at least one protest for Zwarte Piet in which a black woman was intimidated, but rescued by police. The much-beloved Zwarte Piet has brought out the most hateful elements of the Dutch society.

I don’t for one second doubt that these hateful elements make up anything more than a tiny minority in a country filled with people who simply want to enjoy Zwarte Piet with their children, no racism intended. But that may longer be an option. The polarisation is likely to grow worse. Eventually, as the racist image clings more and more strongly to Zwarte Piet, the weary Dutch people will have to relent, probably in the form of a compromise (like having White Peters too).

I feel some pangs for the Zwarte Piet tradition, having attended Sinterklaas parades while I was living in Amsterdam. But I do not feel the tradition should be placed above even a minority of people’s right to dignity and respect. In truth I do not think it is the tradition itself that has infringed on these rights, but it is the outward, the most supremely visible symptom of an underlying current of Dutch racism. This current of racism is so hard to see at other times because the Dutch are ordinarily so very tolerant. But it is there. It is in the way people sometimes speak of their poorer, darker neighbours, only in private conversations, of course. It is in the way that, subtly, a community of immigrants can be seen as the cause of much trouble. It is subtle because the Dutch are too smart to overtly judge a community. They are too tolerant to believe they are doing so. But sometimes I wonder if their actions do not betray them. I am not an expert on racism, but coming from South Africa, I know how to be a racist without believing you are a racist.

[1] The Dutch Sinterklaas is, in fact, the origin of the English Santa Claus.

This entry was posted on 24/11/2013, 8:47 am and is filed under thoughts. You can follow any responses to this entry through RSS 2.0. You can leave a response, or trackback from your own site.