The wonder of not exercising for your health

I have been using Strava for only a few weeks and already I feel that it has changed how I feel about exercise (it remains to be seen if this change is permanent). The instant availability of my speed and distance have a strangely motivating factor about them. I used to run for exercise (it was a chore). Now I run to improve my speed or distance – it’s even (just a teeny tiny bit) exciting.

A strava themed meme (generated by the author at memegenerator.net)

The additional motivation is great (if it lasts). But Strava can also breed unhealthy obsession. Not long ago, during my run, I was interrupted by someone asking for directions. I had to stop and make a coherent reply for about 30 seconds. But in the back of my mind I was thinking: “this adding to my running time.” I would have been friendlier and given better directions had I not been distracted.

And what if I don’t have my phone with me or my GPS doesn’t work or I forget to press record? Then the run has been wasted. There is no record of my effort, no little image of a trophy to mark my latest achievements. And no one will know, unless I tell them (I am not enough of an extrovert to do that). I’d rather have them see it on strava and casually remark on the how far I ran or how much closer I’m getting to some desired speed. 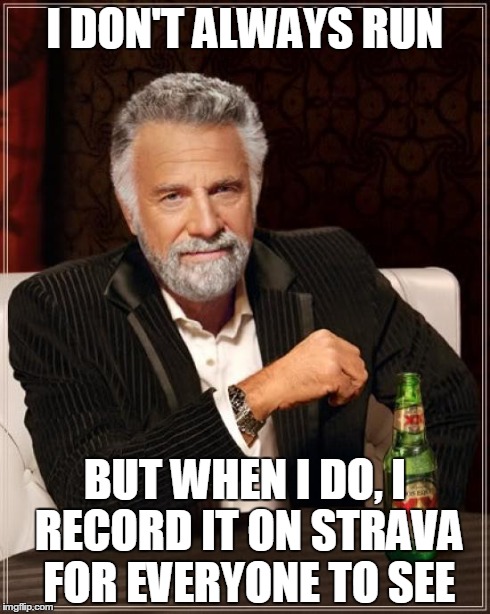 Another strava themed meme (generated by the author at imgflip.com under the username Egkauston)

This feature that other people can see my exercise results has had exactly the opposite effect from what I had expected: I thought I would feel very embarrassed at my extremely slow times (at least compared to my peers who run far more often than I do), that it would be demotivating. In fact, it has been very motivating.

I used to sneer a little at my athletic friends recording their times and reps and such. Exercise was just to stay healthy and keep from dying early. But it seems we need more motivation than that. We need to compete, even if only against ourselves. And so we enter marathons, we load Strava onto our phones, buy sports watches and heart-rate monitors. We become fit, not because we need to hunt or travel or fight, but for self-actualisation. As one of my friends casually remarked: “Strava is what separates us from the animals.”

This entry was posted on 19/10/2014, 2:37 pm and is filed under thoughts. You can follow any responses to this entry through RSS 2.0. You can leave a response, or trackback from your own site.